One of the activities at the University for Third Age Rogaška Slatina, which falls under the branch of Ljudska univerza Rogaška Slatina, is the dancing course for seniors. The initial reason why the participants began taking part in the dancing activities because of the need to socialize and have fun at the same time. But it turned out to be far more than just plain entertainment. After two years of active participation in the dancing classes our participants  reported improvement in their balance, better memorizing abilities and improved general well-being.

Several researchers say that dancing can reverse the signs of ageing in the brain and at the same time improves memory, learning and balance. Seniors who routinely partake in physical exercise can reverse the signs of aging in their brains. Several tests have confirmed that dancing had the most profound effect in reversing signs of aging among several other physical activities. It also helps with stress, anxiety and depression. Trying different types of dance keeps you in a constant learning process which increases the size of a brain region called the hippocampus. This region normally declines with age and is severely affected by diseases like Alzheimer´s. It plays a role in memory and learning as well as keeping one´s balance (Bergland, 2007).

The participants of the dancing courses learn a new dance routines every week. Steps, arm patterns, formations, speed and rhythms are changed every second week to keep them constantly learning. The most challenging aspect for them is to recall the routines under the pressure of time and without any cues from the instructor. These extra challenges account for the noticeable difference in balance. Learning different types of dance routines can rejuvenate the body and the mind minimizing several risk factors and slowing down age related decline.

The participants of the dancing course are not just happier and healthier, but are also the main stars at all the celebrations and events that are organized in the frame of the University of Third Age Rogaška Slatina. 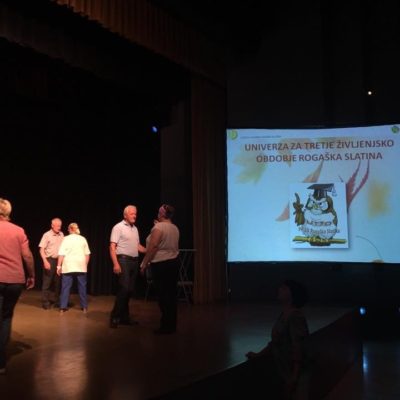